Hey! I hope you are all doing well! I am back with another book review (i know I've been overloading you with book reviews but once I get back to uni I probably won't be reading much!). Today I wanted to tell you some of my thoughts on Dan Brown's latest instalment of the Robert Langon novels, Origin. Not going to lie, I actually haven't read any of Dan Brown's books before! Not even the infamous Da Vinci code but I wasn't sure what to read next so I thought I would give this one a go. 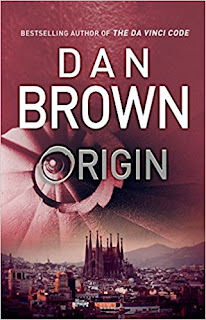 In this 5th instalment in this series, Langdon faces a predicament when his old student and friend Edmond Kirsch invites him to an evening in the Guggenheim Museum in Bilbao where he is told Edmond has discovered the extremely controversial answer the two main questions in our lives; where did we come from? Where are we going? Facing threat after the chaotic end to the presentation, Langdon is forced to run with the museum curator to try and unlock Edmond's secret.

This book really delves into the controversial subject of science and religion, and the battle between the two and indeed how they can exist together. I liked the different opinions in this book, and how Langon is in favour of both of them existing together and it provided some very interesting ideas. I think it is pretty relevant in today's society too. I know that Dan Brown gets a lot of hate for his books and he's not considered a literary genius or anything but I found reading a little bit about Spain's history and the Catholic church really interesting too!

This book takes you through Barcelona in Spain, a city I love and it was pretty nice to be taken here and into some of the buildings that I love and have visited so I really enjoyed that aspect too. This book might be considered "drivel" to some, but it really does whip you into an exciting story that kept me gripping on to the very and I thoroughly enjoyed the book! I think this is the kind of novel that you just need to read and enjoy it on face value and not go into plot holes or things like that!

For what the book is, I honestly really enjoyed it. It was really tense and exciting and kept me guessing until the very end! I wasn't sure how it was going to end and I honestly didn't even guess the ending at all! I would definitely read some more of Dan Brown's books now and I want to try Angels and Demons and the Da Vinci code.

What did you think of this book?
Lots of love,
Eleanor x

Posted by Little Thoughts From Little People at 08:11