Hey guys! Today's blog post is yet another book review! 3 reviews in two weeks aren't you guys lucky ey! It's a review of Bernard Cornwell's recent book Fools and Mortals. I haven't actually read anything by Cornwell before although I shamelessly have nearly all of the Last Kingdom book series in a bag in my room that I am yet to read. But my mum read Fools and Mortals and enjoyed it and suggested I read it! 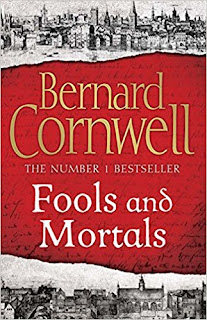 This book is set in Elizabethan London and is about Richard Shakespeare, Williams younger brother who is a "player" in his brothers acting company. Richard is desperate to be given a bigger male role in the plays as he is struggling for money and when Williams plays go missing he is put under suspicion.

I don't really go for historical type books very often but I do really enjoy them so I was excited to get transported back to Elizabethan England and this book was very descriptive and gave a good view of the dangerous, patriarchal times as well as following the story of Richard. I enjoyed the overall story arc and found it exciting and pretty tense at some points too. It's not extremely fast paced all the way through, and my mum kept describing it to me as "gentle" which I wouldn't say either because of the violence in parts, but I know what she means, it doesn't exactly keep you on tenterhooks particularly all the way through it's quite a slow arc. But don't get me wrong, it's definitely not boring!

I enjoyed the characters, I thought they were all written well and came alive for me and I enjoyed the love story unfolding between Richard and Sylvia too. I enjoyed the relationship between Richard and William Shakespeare actually I thought that it could be quite realistic, they obviously don't get on well, William finds him annoying and whiny, and Richard thinks his brother is mean and rude and this starts to develop and change throughout the book which is nice to see a progressing relationship. I found some of the characters humorous and I enjoyed the speech in this book!

I felt like this book genuinely gave an insight of what it was like in London in the Tudor times and with the rising of the theatre and actors and I found it to be a really interesting book too.

I liked the ending of this book too actually but I did have a bit of a problem with how one character, in particular, ended up...

Overall I would really recommend this book I enjoyed reading it and it's definitely motivated me to give Cornwell's Last Kingdom series a read finally!
Lots of love,
Eleanor x

Posted by Little Thoughts From Little People at 08:36