Hey guys! I hope you are doing well! I am officially back to uni now and I am so tired already! Feeling ready for easter and I've only been back a few days! Today I am going to do my first book review of 2018 and it is on the Underground Railroad which is a novel by Colson Whitehead. 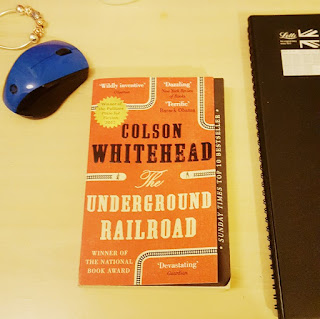 This book is mainly centred around a girl called Cora who is a slave in America who makes a bid for freedom along with fellow slave Ceaser. It is about her life on the cotton plantation and then her escape from the slavecatcher Ridgeway to get north where black people are treated slightly better. This book brings to life the "underground railroad" making it a physical entity in this book, a physical train running underground, rather than a route.

For obvious reasons, this book is highly emotive and moving. There is danger and heartbreak at every turn through Cora's journey to safety and it is definitely a really gripping book. I thought it was really well written, I had never heard of this author before but I would read more of his books as I think his writing is really good. There were a few twists and turns in this book, and I was never sure what was going to happen to Cora and if she'd make it out alive or if she would manage to escape. and it really kept me reading until the very end.

I think this book is a really important one, especially in this day and age and we don't often talk or read about the harsh realities of the slave trade and it really put everything into perspective and imagine yourself in Cora's shoes. I actually think that in 5 years time this book will be a classic and they will be studying it at A-level. Now that I have finished it i feel like telling everyone to go and read it!

The only thing is that nagged me a bit with this books was I felt some characters to be underdeveloped, even when Colson goes into backstories about the characters, he states facts where I want to hear emotion to really connect with the novel. Furthermore, because it is written in 3rd person, it is just a little bit less personal and connecting than if it had been in first person and there are times which I thought I felt too disconnected from Cora when I really didn't want to be. I personally really liked that he made the railroad in the book real, I thought it was clever of him and there is so much truth in this book apart from that.

Have you read this book? What did you think?
Lots of love,
Eleanor x
Posted by Little Thoughts From Little People at 09:31