Hey guys! It's been absolutely ages since I have done a book review like this! I feel like I can barely even call myself a book blogger at the moment! Being at uni has meant I've barely had time to do much reading! But since I have broken up for Christmas now I am hoping to do some more reading. I just finished the book Nerve earlier today and I really had some thoughts on the book! 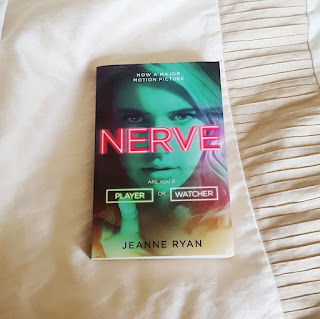 Okay, I am not going to lie, straight off the bat I did not like this book! I saw the film a few months a go and really liked it so I was looking forward to reading it but I have to say I was really underwhelmed and disappointed. This review contains spoilers.

Okay so firstly, I have to say the characters were really bland and unrelatable. None of the characters seemed to have any depth to them. Let's talk about Ian. He is way too nice, the fact that Vee and Ian are getting it on after knowing each other for all of 2 secs is ridiculous. I literally could not believe he was that nice it was unreal. It is hinted at that he has some home problems but they're never gone into detail about, and honestly there was just no substance there. There is no character development with Ian or Vee, again it is hinted that Vee has some problems but they're never really outrightly discussed. Also, I don't know if this was the writer's point but I found it weird that basically everything she did was for a boy, like first Matthew and then Ian? I think there was a lot of potential but unfortunately, it wasn't carried through and it seemed very unrealistic. Even the other characters in the game seemed too unrealistic and weirdly horrible and no one in the book had any common sense.

The same goes for the plot really. I thought the premise sounded so exciting and had so much potential but it just fell really flat for me. There were no twists or turns or anything, I was sort of begging for a twist or something exciting to happen. While it wasn't boring or anything like that, it was just a bit obvious. I really disliked the ending I have to say, I thought it was so anti-climatic, I mean what they did changed nothing? And honestly what was the point of the random cliff hanger ending? Also even the prologue was weird like they never really explained what happened to Abigale, the character in the prologue and she was never brought into it again which was so random really.

Okay I really liked the film, so I want to talk about why the film was better:
- Way way more depth to Ian, really gave him a reason for wanting to be in the game
- Better reasons in general for the players in the film, like in the film Vee really wanted to help her mum but in the book she was just sorting of playing for presents like a new phone.
- I really enjoyed how in the film they actually overcame the watchers in the end and actually shut down the game, whereas in the book they did nothing to change anything.
- I actually enjoyed the plot a lot more in the film, I liked that there was more mystery to the film, I feel like the film took the premise of the book and then made it into something much better

There are some good parts in this book though, found it easy to read and engaging and I thought it was fast-paced and even hooking it just didn't go in the direction I hoped it would go in, which I assumed would be more like the film. Maybe I am biased because I had high hopes going into it after the film!

What did you think of the book?
Lots of love,
Eleanor

Posted by Little Thoughts From Little People at 08:29