Hey guys! I am doing a slightly different post today, it is about the things I don't regret doing. I haven't done a personal post in a while so I thought this would be a good idea! 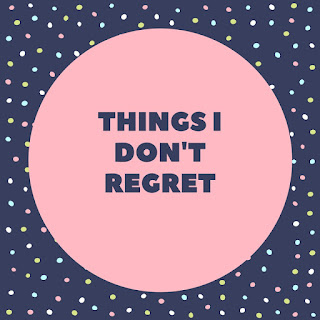 Another thing I don't regret is going to university. Going to uni is a big decision for a lot of people, it's a lot of money and it can be quite scary. I think I've become a lot more independent since going and I think that I learnt a lot about myself and it has opened up a lot more doors. Sometimes the stress makes me think that it was a bad idea but when it comes to it I think I made the right decision.

Going to uni with a boyfriend. This is another thing that a lot of people are weird about, especially if you're moving a fair distance from your boyfriend/girlfriend. Long distance does put a bit of a strain on any relationship and a lot of people are worried about the "temptations" that university can bring. But I don't regret staying with my boyfriend throughout university and we have definitely made it work despite sometimes going for a month without seeing him.

Starting a blog. I decided to start this blog four years ago thinking no one would really bother reading it. Okay so I still think that but I definitely don't regret starting a blog and putting my thoughts and myself out there. It is nerve racking to write about some things but I have talked to many people through blogging who are so nice and supportive and that have made me really thankful I started one.

Learning an instrument. My mum made me learn piano when I was six and I hated it honestly I hated learning it and my teacher. But now I'm actually really pleased that I did learn it because its such a good party trick and to release some stress.

Change. As I have gotten older some of my views have definitely changed and some parts of myself too and I think that's a good thing in many ways. I don't regret change because it's turning me into a better person!

There are the things I don't regret! I hope you enjoyed this post!
Lots of love,
Eleanor x

Posted by Little Thoughts From Little People at 09:58