The Sun Is Also A Star- Nicola Yoon book review

Hey guys! So if I stick to my blog schedule then my up coming posts could be quite "bookish". I have a few book reviews and book tags coming up this week and next so I may try and break it a little with a beauty review next week. The first of my book reviews is The Sun Is Also A Star by Nicola Yoon. If you weren't aware, Nicola Yoon is the author of the revered Everything Everything which is now in the cinema. This book is not talked about as much which is why I decided to review this one instead despite reading them close to one another. 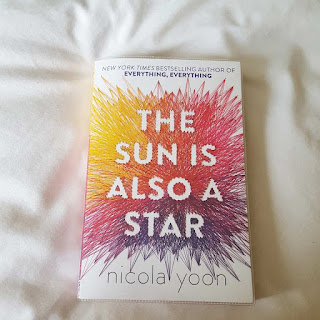 Natasha is a girl of science and facts and does not believe in fate. She is spending what could be her last day in America before she gets deported to Jamaica. Daniel wears his heart on his sleeve and is looking for a sign from the universe about what to do about his future. The book is about these two characters with very different ideologies meeting and getting to know each other. This book is set over the course of a day which I think is really clever actually. The time frame makes it easy to become submerged into the book and hard to put down as every page of the books leads on directly from the last. The narrative of the book swaps between characters, predominantly Natasha and Daniel but sometimes other characters and occasionally little notes from the author. The swapping between characters annoyed me a little since they swap so frequently like we get a page of Natasha speaking before it swaps.

Natasha was born and raised in Jamaica until the age of 8 and Daniel was born and bred in America but has strict Koren parents and heritage which he keeps with him (it is hinted he has Korean friends and a Korean school ect). I really liked that the characters cultural history was a part of this book as it can be ignored sometimes and I really liked that two different cultures came together and it was refreshing and amazing not to read a book about caucasian characters, to be honest like nearly every book I read. It was interesting to see how the different characters were either happy with keeping their cultures as a part of them (like Daniel) or tried to reject it (like Daniels brother).

One theme that runs throughout this books is the idea that everything we do affects someone or something else. The importance of actions is something that resonates strongly throughout this and is quite interesting to think about. Something I also enjoyed was the clash of beliefs. Natasha is a strong believer in facts and science and does not believe in love. But Daniel who believes in the universe and destiny tries hard to try and change her mind, especially about love. This clash causes a lot of rifts but I think they both learn something from each other.

I think many will find the ending of the book disappointing or undesirable but I actually quite liked the ending it was sort of inevitable. I like a change from the usual fairy tale ending really, it's more realistic.

Overall I thought this book was quite good it was quite an easy read that took me two sittings. Have you read this? What did you think?
Lots of love,
Eleanor x
Posted by Little Thoughts From Little People at 08:31