Hey guys! Today I am doing a review of the Netflix series "Girl Boss". I am a bit late to this party as it came out a while a go but I have only just got round to watching the series. It is a loose retelling of Sophia Amoruso's life, the founder of Nasty Gal. I'll be honest, when I first started watching I had never heard of Sophia or Nasty Gal. I had heard of her book "Girl boss" but I never really knew what it was about. This series got mixed reviews and I saw a lot of people not like it on my Twitter and it has actually been cancelled after one series. This series was quite popular within bloggers as it shows the inspiring story of a girl setting up her own site and being successful with it. 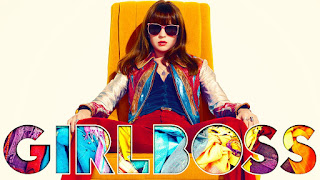 When I first started watching it, I wasn't the biggest fan actually. I found the acting to be really cringy and overdone. I think the main problem with this show is that they overdid the character of Sophia. She is very hotheaded and rash and doesn't come across as a very nice person. They did it to make it funny I think, but it ended up making the main character unrelatable and making the show a bit difficult to watch at times.

Despite calling itself a comedy I didn't really find it all that funny. It was quite dramatic. However, it does tell a really inspiring story. Sophia is finding it hard to find her place in the world and is running desperately out of money. Comming from nothing to making a successful vintage shop is really inspiring and as the series went on, I really got into it. I feel as though we saw some character development from Sophia too. In the end few episodes, something big happens to her (no spoilers don't worry!) but in the end she actually talks about her feelings, rather than just shouting and acting out of anger.

Although I had a shaky start, I actually really got into it and started to really enjoy it and I'm sad they're not making another series! I personally really liked this series! Tell me what you thought about it!
Lots of love,
Eleanor x
Posted by Little Thoughts From Little People at 08:12