There's bravery in being soft

Hey guys today I have a little extra post, sort of one of my old style posts or my little thoughts about I quote I saw yesterday. I wrote this post as a note on my phone yesterday and I wanted to share it so I hope you enjoy. 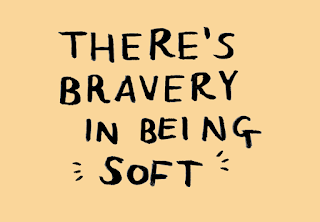 I have always been a sensitive girl. The kids at primary school used to call me sensitive, I guess I've always been quite fragile, it doesn't take much to knock me off guard or make me upset. When I was a child, I remember frequently being told I needed to toughen up or I wouldn't make it through life. Yes as I've got older I have toughened up a little bit, I am more likely to say what's on my mind or stick up for myself. But I am still soft and sensitive with the world's biggest conscience.

I used to hate being called sensitive, I used to despise it. I wanted to shake that connotation when I reached high school and I was gutted when someone at high school pointed out (not in a rude way) that I was sensitive. It used to upset me, of course it did, the sensitive girl was sensitive about being called sensitive. Now I'm older, people haven't really said anything like that for a while but it still stays with me, I still have this internal image of myself.

But isn't there something tough about being sensitive? In such a harsh world its so easy to become bitter and build walls around yourself, and maybe there is something brave in staying sensitive. I'm sticking with my goodness and softness and not letting a harsh world corrupt me or my humanity. It's easy to mistake being soft for being weak but it isn't, actually there is something brave about having your emotions on show for the world and not letting the world change you.

So yes, I am emotional and soft and sensitive but maybe I can start to see this as a good thing, maybe there is real bravery in softness.

Lots of love,
Eleanor x
Posted by Little Thoughts From Little People at 05:47