My phones through the ages

Hey guys! So today I wanted to do a fun little post and show you my old phones that I've had throughout my life! I've not seen anyone do this before so I thought it would be quite funny! I've never actually had a phone disaster and all my phones are intact and I still have them all! Because of this I've had surprisingly few phones really considering I got my first phone over 10 years ago! I hope you enjoy. 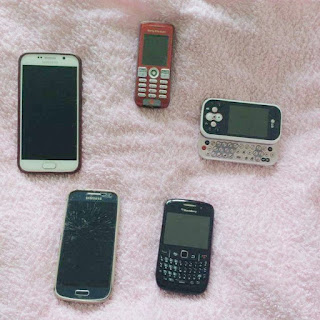 1) My first ever phone was this red Sony Erikson! I got it when I was about 11 years old as I was nearing the end of year 6 and heading to high school! This phone was honestly rubbish. It was so slow and had basically no memory, I could have about one song and only a few pictures on it. I was very excited to get a new phone when this one came to an end. I used to use Orange and I would pay £5 a month to get free texts for a month, those were the days.

2) This LG push up pink phone was honestly one of the best phones ever! I loved it so much, I think everyone has had this phone at some point. It was a massive upgrade from my first phone and I think I got it at around the age of 13 but I'm not entirely sure. Anyway, I had fond memories of this phone and would probably by it again if they remade it and updated it a bit.

3) Ah, phone no3, the Blackberry Curve. Starting to get closer to the Smartphone era I was excited to get this phone to start using BBM at the age of 15).  Unfortunately towards the end of its life as I filled it up with pictures and music it ran extremely slowly. Although I used to love the customisable LED lights so you knew who had texted you by the light your phone flashed, I miss that on my newer phones! I do have some good memories using this phone and using BBM (i really miss that beaten up emoji face) and when I was starting to text my boyfriend. Say what you want about Blackberries but I did like the lay out of the phone.

4) My first touchscreen phone, the Samsung Galaxy S4 Mini I got for my 17th birthday and I never looked back with Samsung phones. I personally just love them and how much memory they have and I loved this little phone so much. You'll notice this is the only phone I smashed, funnily I was bragging (rather drunk) and how my phone was invincible and dropped it on the floor. Turns out it wasn't invincible and did in fact smash.

5) My latest and current phone is the Samsung Galaxy S6 which I love. My phone will run out in February next year so I have a bit of time left with this phone. I've had no problems with it and it runs really smoothly!

Have you ever had any of these phones? What did you think?
Lots of love,
Eleanor x
Posted by Little Thoughts From Little People at 05:31