My experiences on the pill 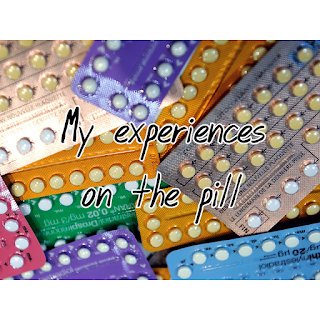 I have had a bit of a rocky journey with the pill and I wanted to show you about some of the pills I've been on and how they affected me. But with all of these stories and other ones you see it is important to remember that everyone is different and what affects me may affect others in different ways. I also want to help those of you who are not on the pill but are thinking about coming onto it and to hopefully give you a bit more information about the pills I have been on.

The first pill I was put on is Yasmin, which is quite a popular pill and I think a lot of people have been put on this at some point. It's a combined pill, which means it has oestrogen and progesterone hormones and like all combination pills it is 99% effective. This type of pill you take for 21 days and have a 7 day pill free gap in which you have a "period" although this is not a natural period and is more of a breakthrough bleed that may last the same amount as your previous period. Unfortunately, I was only on this pill for 2 months so I can't give a full review, this was because being on it started to make me sick so I went back to the doctors to make it change.

The second pill I was put on was Microgynon 30 and I was on this pill for a few years I think. This pill also goes by the name of Rigevidon, although it is debated among takes who have been put into this as to if it is the same pill. This is also a popular combined pill. I got on well with this pill for a long time. I did not notice any difference in skin (neither cleared it or made it worse particularly) or weight or even my periods. However it did stabilise my period which was nice, it made me able to predict the exact day it was going to come and it never came early or late. For the most part, I liked being on this pill. That was until last summer when, once again, I started to be frequently sick and nauseous. Now I am not 100% sure that the sickness was from this pill, it seems strange that after a long time of being on it it only just started to show symptoms however I really did not know what else to put it down to as I was often being sick randomly and them feeling okay afterwards a few times a week.

After speaking to the doctor who thought the oestrogen in pills might be having a bad effect I was put onto Cerelle, a progesterone only pill (pop pill or mini pill). These pills are taken differently, you take 28 pills with no 7 day break. This means that gradually, often periods completely stop. However, this pill really did not agree with me and instead of making my period stop, I had a period non-stop for 4 months. That's right, a continuous period for 4 bloody months and I can tell you it was not fun! So I was back to the doctors begging them to put me back onto a combined pill and that I'd just deal with the sickness.

This time, the doctor put me on Millinette, a combined pill but with less oestrogen than the other combined pills. So far, this pill seems to be working for me! Similar to Microgynon 30 I have not noticed any adverse effects.

I hope my experiences have helped you in someway! The pill works for different people in different ways and I have never had any awful effects such as depression on any of my pills and I encourage you to keep trying with different pills until you find the one for you as they are all different! Like I said before, what worst for me may not work for you and vise versa so it is important not to get scared by any horror stories you read on the internet and see for yourself. I hope this also helped to inform you about anything too!
Lots of love,
Eleanor x
Posted by Little Thoughts From Little People at 06:31