Hey guys! So I am back with another book review. I have decided to try and post at least one book review a month! I actually finished this trilogy last night (Friday night) and I really wanted to write this review even though I won't be uploading this until my usual posting day, Monday. If you saw my what I got for my 20th birthday post you would have seen I received a load of Patrick Ness books from my boyfriend. After reading a Monster Calls last year I wanted to read more of his books! I read and reviewed "More than this" last month, you can read the review here. 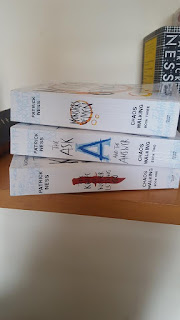 "Tom Hewitt is the last boy in Prentisstown. But Prentisstown isn't like other towns. Everyone can hear everyone else's thoughts in a constant, overwhelming never ending noise. There is no privacy. There are no secrets. Or are there? Just a month before the birthday that will make him a man, Todd unexpectedly stumbles upon a spot of silence. Which is impossible. Prentisstown has been lying to him, and now he's going to have to run."

As a whole, I loved this trilogy! I was a little worried it would be too young for me, I would say it's probably aimed for about 12+ age whereas More Than This I would say is more YA. I would say this is so good for anyone of any ages and I will definitely be passing it into my mum to let her to read! All three books are really fast pace and they are all hard to put down. I will say that for me I thought the first book started a little slowly, it takes a while to get used to and to work out what's happening. I loved the concept overall, I love futuristic books and just like More Than This, this book is set in the future.

Patrick Ness is such an amazing writer, he's probably my favourite writer at the moment but he's a writer you can't really trust! In that, throughout these books, I had no idea what was going to happen! The plot twists are so difficult to second guess and I do love that but I was so scared for my favourite characters as I do not trust him to give a happy ending! Having said that I did like how the trilogy did end and I am so glad it didn't have a disappointing ending. These books are not exactly a light read, they're very dramatic and they made me cry a few times and I feared for the characters throughout the books. Ness is the king of cliffhangers and there were so many in these!

I really liked the characters in this trilogy, I thought they were very vivid and 3D. Ness does not use any description of the main characters, other than skin colours, he does not tell you what the characters look like which I guess is good, it allows you to imagine for yourself what the characters look like. Having said that, I do think that Viola could have been explored more throughout the books, Ness did not disclose what she was thinking and when he started to use her as a narrative in the second book, he just used her to tell what was happening, rather than her emotions. At least that's the impression I got. There were no annoying love story lines between the characters, you guys know how I feel about love in action books and I really liked how it wasn't explicitly talked about for the most part of this trilogy and focused more on the important storylines.

Overall I would really recommend these books for anyone of any ages! If you love dystopian futuristic style books you will love these. They were gripping and also quite gritty and I loved the topics Ness tackled too including misogyny, growing up, war, and his writing style is amazing and just gah. Yeah go give these books a read!
Have you read this trilogy? What do you think?
Lots of love,
Eleanor
Posted by Little Thoughts From Little People at 10:49