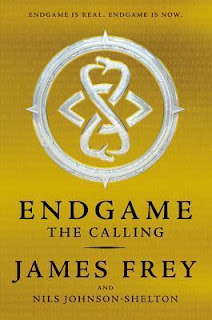 Hey guys! I have finished book 24 of my 30 book challenge for 2015 so I am feeling very proud! This book was one that really caught my eye in the shops and so I bought it quite a while ago but only got round to reading it a few weeks ago. I went into Endgame: The Calling blind, as the blurb does not give anything away. I have not read anything by James Frey before and so I did not know what to expect.

The book is about 12 teenagers who are part of ancient blood lines, and when meteors hit the earth, the start of the end of the earth, they are instructed by the creators of the world to "play the game," to kill each other and find the keys. The one who lives and finds the keys has the ability to save who they want from the destruction of the world. The teenagers are from all over the world something which I really loved about this book, there are only so many apocalyptic or post-apocalyptic YA novels about white americans.

A really interesting thing about the book is that inside it is a hidden puzzle, if you get the clue you can win a large sum of money. I had no intention of trying to work the clue out as I just wanted to enjoy the story but I am excited to see if someone gets the clues. There is also a website where people can talk about this hidden puzzle and it explains more about the different ancient blood lines too.

I liked the idea of following 12 different people in their quests to find the first key, the earth key. Frey changes between the characters so that by the end of the book there is a part of you that wants them all to win. However, what confused me most was that I also didn't want any of them to win. The teenagers are trained killers, they are blood thirsty and out to kill and so I didn't sympathise with any of them either, some of them less so than others. Even the character that I assume Frey wanted us to sympathise with most, Sarah the white american (just when I thought we'd have a different main character) still had a dark side and some of the other characters I felt were more interesting anyway. I am not sure if that was Frey's intention or not.

The plot is really imaginative and exciting, it constantly kept me on my toes. It's gory, with lots of blood shed and amazing action scenes which regular readers know I love. There is love within it of course, and of course it was a difficult love which shouldn't have happened.This irritated me a bit but it did give the story an interesting twist; when the teenagers who were supposed to be killing each other fall in love. There is lots of love for Sarah through her boyfriend  Christopher who I disliked as a character. He was annoying, idiotic and blinded by his love which is all the things I hate. Again, I don't know if it was Frey's intention for us to see him like that but they was definitely my views.

This is the first in a trilogy, I have pre-ordered the next one which comes out on the 6th of october and I am really excited for it. I would recommend this book I think it's clever, exciting and mysterious. I would give it 3.5 stars out of five.

If you've read this tell me what you thought! Also comment if you think you would give this book a go after reading my review!
Lots of love
Eleanor x
Posted by Little Thoughts From Little People at 04:18