Hey guys! Today's little thought is on the "friend zone" an increasingly popular phrase. The friend zone is the idea that (usually) a woman rejects a man because they are too close friends. The way this is used, often blames woman for rejecting men they do not want to be with, and is used as a way of making women feel guilty for their decision. Men complain they are "too far in the friend zone" that they cannot have sex or be in a relationship with this woman. It is often stated that women ignore these "nice men" and go for the jerk. 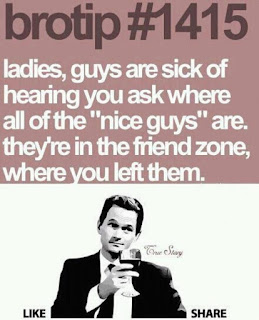 The friend zone acts as a way of controlling women. It is used as a way of making women feel guilty or blaming them for the fact they do not want to be with a particular man. There is no such thing as the friend zone. Women are attracted to who they are attracted too no matter weather you are friends with them or not. The friend zone gives the impression that the only reason men are friends or are nice to women, is so that they can have sex with her, spending time with a woman is seen a an investment and if it doesn't pay off they are in the friend zone. It takes away the idea that men are simply friends with woman because they want to be, because they like the idea of simple friendship and instead want something more.

By using this many women feel hurt, someone they thought was their friend, was actually using them for something more and when, unsurprisingly, it turns out the woman does not want to be more than the original friendship, these men make a deal of it and say they are in a mythical place called the friend zone. It is not a friend zone, its just an excuse for them not to face the reality that a woman simply does not want to be with you.

People who believe in the friend zone, belief that if you are nice to a woman, she owes you something, that somehow she owes it to you to be in a relationship with you or have sex with you. As if it is that mans right to be in a relationship with a woman, which take away a woman's right to choose who she wants to be with. This can actually lead to woman being in danger, recently when some men have been rejected, they have killed these women, or even gone on a killing spree, killing lots of innocent woman for the simple fact that one woman did not have an attraction towards them. 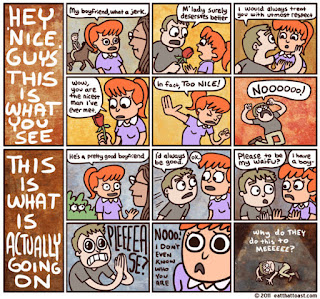 If you want to read more on why the frienzone is a myth and is used to control woman, see this artical here

Lots of Love
Eleanor x
Posted by Little Thoughts From Little People at 02:56