Hey guys! Today the mental health issue I wanted to talk about is schizophrenia. I'm a bit of a nerd on this since I've learnt a lot about it this year so all of this is taken from my own knowledge, feel free to correct me if I'm wrong!  There are many different types of schizophrenia and different sub divisions, for example hallucinational and delusional schizophrenia but also catatonic schizophrenia, where a person may seem to 'lack' things eg they may stop through sentences or have periods where they don't talk or don't move. A lot of people confuse schizophrenia with split personality disorder, that people with schizophrenia have a "good" and "bad" side, such as Jekyll and Hide or Gollum but that is something else entirely.

Because their are so many symptoms schizophrenia shares with other mental disorders it can take six months before it is diagnosed. Likewise as it is a psychotic disease, the people suffering with it often don't know they are. There are many different ideas about what schizophrenia is caused by and often it depends on the individuals circumstances for example it could come from your family and how you were raised or traumatic childhood events or commonly an excess of dopamine receptors which may be influenced by the use of hallucinogenic drugs.

Schizophrenia can be difficult to treat, often drugs are used but if a person has delusions and paranoia, often they will not take them on the basis that they believe they are being poisoned. While schizophrenics are more likely to harm themselves than other people, severe schizophrenics are often kept in hospitals which can be very expensive but they are getting 24 hour care which some may need. Others may live in communities and be visited by doctors daily.

Many people do live with schizophrenia normally and keep their symptoms under check as much as they can but do continue to live normally. Another common misconception about schizophrenia is that they accociate it with violent behaviour, but as I said above, schizophrenics are actually rarely violent to others and when they are it is often due to drugs or alcohol, which is the same for people without schizophrenia.
I hope this has informed you! If you would like to get involved with mental health awareness march, either by writing a piece on a mental illness or telling us about your storyand living with a mental illness, this could be schizophrenia or anything else please get in contact and together we can raise awareness!
Lots of Love
Eleanor x 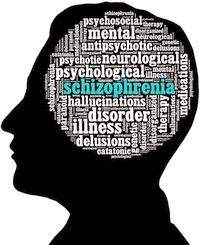 Posted by Little Thoughts From Little People at 10:11