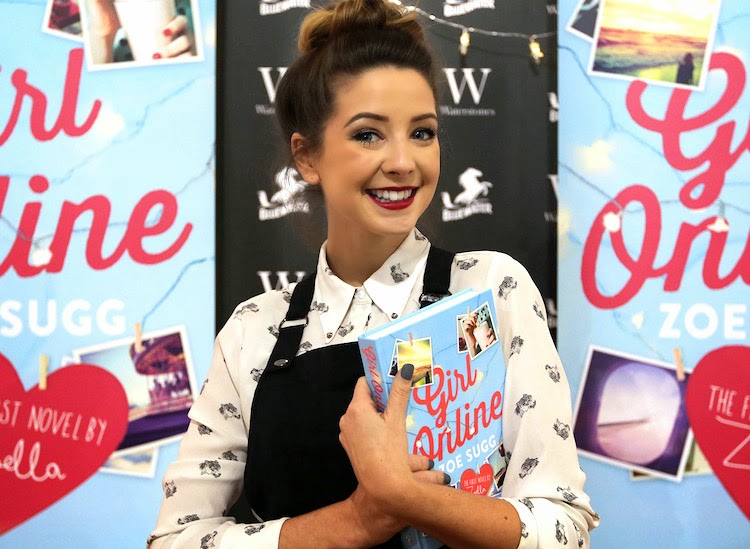 Hey guys! Today's little thought is less of an advice one and more of a debate style post which I would normally do on a Friday but this is just a little thought I've been having for a while and wanted to talk about it. Recently, there has been controversy surrounding Zoella (vlogger Zoe Sugg) about her book, when it recently came to light that it has been ghost written. This means that Zoe did not explicitly write the book herself, it was done by another writer, or a team of writers who will have been paid to remain anonymous. I do really like Zoella, I occasionally watch her videos and read her blog and I think she is a very lovely down to earth person but I am not an avid fan, I'm not even subscribed to her so my opinion is by no means bias in anyway.

When I heard she had written a book, I was a little surprised and how quickly she had and how she'd had time. I was also a little annoyed somehow, if the book had been written by anyone but Zoe, it wouldn't have got the attention that it received given that it is purely a teenage book and by no means a masterpiece. However, there are some things you have to keep in mind. From the begging it would never be a masterpiece it was intentionally a teenage book to be read for enjoyment, not to question big idea's in the world and so I suppose when looking at my argument, it's a little pointless to be angry about that. I have never read the book but from what I've heard it's similar to a lot of books in that it's a fun quick easy read, a feel good book and I'm sure I'd really enjoy it, plus it also was written with the intention of helping some people, full of tips for people which as you guys know is one of my aims too and I've always really admired her for what she does.

When news was let out that it was ghost written, I didn't really have an opinion. Lots of authors use ghost writters, James Patterson being the classic example. James Patterson is now not a name, but a label, of a team of writers all working to produce debatable high quality books and fast. However Patterson used to write his own books, we have seen his good penmanship and so arguably it doesn't bother us as much because we know he can write well whereas this is Zoella's first book and she didn't write it herself. Her argument is that she came up with the story line and characters however while this is consolidation to some, I personally think this is not a great argument. It is not very hard to come up with a story line. It's really not, two or three story lines must come to me in a week, story lines that if I wanted to I could write to make very interesting plot lines with interesting characters and coming up with a girl meets boy story is not really taxing. Writing it is the difficult bit, writing and editing and perfecting.

However, overall I really think that complaining about it is pointless. While people see it as unfair that she has a book when so many great writers can't because they don't already have good status, and I do agree, I think you just have to look at it on the surface and see it as a young adult feel good light read that teenagers will probably enjoy and looking into it at a more deep level is not going to reduce the books being sold or take it off the shelf. My opinion of Zoe has not changed at all I do not think it's her fault as she is a label. It is managers and the publishers fault more than anything. I am looking forward to getting round to read the book as I'm sure I will like it.
What do you guys think?
Lots of Love
Eleanor x
Posted by Little Thoughts From Little People at 09:47