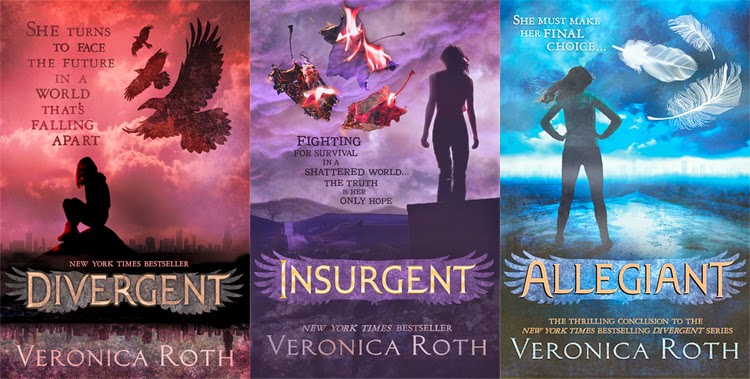 Hey guys! So I promised I'd do another book review and this triology is one that I've wanted to do a review on for a while. I read the trilogy on holiday this year, and on the plane back from Tenerife at about 1 am, I read and finished the final instalment of the trilogy, Allegiant, and sobbed my little heart out.

Quick Overview (no spoilers)
For those of you who don't know, the Divergent trilogy is about a society set in the future, what we assume to be a post apocalyptic future. In order to keep peace within this society, people are split up into five sections based on their personalities. Amity which is for kind people, Candor, which is for truthful people, Abnegation, which is for selfless people, Dauntless which is for brave people and Erudite which is for smart people. When people turn 16, they must choose which division to be apart of, most people stay in the one they were born but some move, these people are often looked down on by the divisions. Most people belong to one of these divisions, but some people do not have one particular personality and these people are the Divergent, these people are often hunted down by the society, viewed as a threat by them.

Characters. (a few minor and unimportant spoilers)
The main Character of the Divergent series is Beatrice Prior (Tris) who is a divergent. I did like tris as a main character, I think it's impossible not to compare her to Katniss and Tris is a bit more human somehow at the beginning of the series anyway, she loves and she feels like she doesn't belong which is something we can all relate to. As the trilogy progresses however, she seems to loose a lot of this becoming more like a solider and more unrelatable and some of her decisions I felt were a bit stupid (something I feel often with the protagonist of YA novels.) I liked the character of Four he is one of my favourite characters I think, I despised Caleb and have mixed feelings about Peter. I also really liked Christina, Zeke and Uriah.

Love
Okay so in the first book, Divergent the love story between Tris and Four really annoyed me. I actually really hated all the love bits in this book. I am not a one for love stories anyway and since this book had so much going on, a really strong plotline, I was really pissed off that Roth decided to bring in a love story, I really wanted to discover more about this new world and the whole love thing really desecrated it and I actually almost put the book down. I really liked how in the Hunger games the love thing was really put off by Katniss and I just didn't enjoy how it was a main part of this story and I think it should have been at least put off until book two. Having said that, when it came to the third book, I understood why Roth decided to include the love story and since Four became a likeable character it really added to the sadness at the end of the book. (not gonna spoil that one for you but those of you who have read it will know what I mean)

Plot line (no spoilers)
I really loved the interesting plot lines and each book brought a new kind of conflict and a new spin which I often got confused by but I really enjoyed. The book definitely kept me on edge and I read the whole trilogy in thee days because I just couldn't leave it alone it was so exciting. At first I thought it would be too similar to the hunger games and I deterred from reading the book for ages because I was worried I wouldn't enjoy it. But it's actually very different to the hunger games, and although has a similar conspiracy theory idea running through it, it was actually a very different story line about very different people. I would recommend reading the book if you've seen the film because it's vastley different. I really enjoyed the film but it misses out some important characters and it's often not clear on who is who in the film so definitely read the books.

Overall I give these books 8/10

My next booky post will not be until after new year, when I will be running down all the books I read in 2014 and talking about the best and worst so look out for that! What did you think of the Divergent Trilogy?
Lots of Love
Eleanor x
Posted by Little Thoughts From Little People at 05:59