Hey Guys! Today i wanted to start a new little debating segment on my blog, where once a month (ish) where I'll set up a debate with my opinion and you guys can give your opinions down in the comments and tell me what you think. A lot of the time nowerdays some people don't care enough to for opinions so this is good practice to have a think and form your own opinions even if you've never thought about the topic before.

The topic I wanted to start off with is: "are single sex schools better for education or not?" I had never really thought about this so I wanted to lean more and figure out my own opinion. 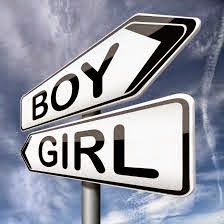 Stats show that boys do better in  mixed schools and girls do better in single sex schools which didn't surprise me too much, because overall girls are doing better in education at most subjects (apart from physics.) Also stats show that most girls have a 'bedroom culture' which means they are more likely to stay in and work hard as opposed to boys who are more likely to go out on school nights and less likely to do homework. If girls were in a single sexed school they will have mainly girl friends meaning they are likely to influence each other to work harder and so preform better. Now this of course is highly stereotypical and is simply what statistics tell us and I know that it isn't always the case as not all girls are hard workers and not all boys are slackers of course but looking at it from a very vague and detached way, that is the reason. Nevertheless in my opinion despite this, girls do better in mixed schools anyway so in terms of performance, I do not think that single sex schools are extremely beneficial to girls education as they seem to be doing better in mixed schools as it is.

Another argument for this is that "boys and girls are an unwanted distraction to each other." Meaning that boys and girls would be spending more time trying to impress each other as opposed to concentrating on their work. I would have to counter this by saying as a member of a mixed sex school, I have never felt like I did worse in class because of trying to "Impress" the opposite sex. I also would imagine that even if you went to a single sex school you would still have contact and have many friends of the opposite sex due to sports clubs or parties you've been to and so there is still chance of you becoming "distracted" by a crush and by thinking of them in class. Nevertheless I have never met anyone who just spent entire lessons purely thinking of someone they liked or had a crush on to the point of their grades actually dropping. Plus no matter what type of school you are always going to have a natter to your mates about boys or girls and wanting to impress them but I don't think that this is necessarily bad nor have I seen it effect someone's performance  massively. 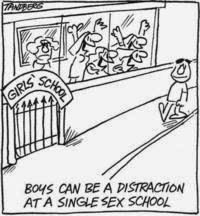 However I do think that sometimes girls in particular do feel better if they are with their own sex and not with males and sometimes it is part of someone's religion to be with the other sex. I am against the claim that single sexed schools are bad because when the person comes out of the school they won't know how to fit in with the rest of society or the opposite sex in the society. I have never known someone come out of a single sexed school and be at a disadvantage in terms of socialisation and "fitting in" because as I said earlier everyone has contact with the opposite sex anyway.

Overall, in my opinion I do not think single sexed schools are better for education. I do not think them worse, but I don't think that they're particularly better either. In terms of performance it is the same, girls out preform boys anyway. I really enjoyed that I went to a mixed school because now I have lots of boy and girl friends and I am glad of that and I have never noticed a downfall in my performance just because I am friends with boys.

What do you think? Do you think they're better or worse or neither?
Until next time,
Eleanor x

Posted by Little Thoughts From Little People at 03:26